After Reviewing Thousands of Listings: What We Found Shocked Us

Google My Business spam is a rampant problem across the digital marketing world. So prevalent that the Wall Street Journal wrote an article on this exact topic. Businesses and SEO companies are constantly looking for a way to get an edge over the competition. Unfortunately, some of them resort to unfavorable practices, such as creating fake Google My Business listings.

We set to conduct a comprehensive study of fake Google My Business listings impacting the disaster restoration industry.

What we found is astonishing. We hope that this study will accomplish three things:

Background of the Fake Google My Business Case Study

As we looked across markets in the United States, we would see fake Google My Business listing over and over again. So let’s define what we considered as “fake."

Fake Google My Business listings were defined as listings that did not appear to represent an actual disaster restoration business.

That included listings created by lead generation companies, regardless of whether the leads were ultimately sent to an authentic restoration business.

For example, a Google search for the phrase “Disaster Restoration Company New York City” returned dozens of spam listings. Listings that looked like this….. 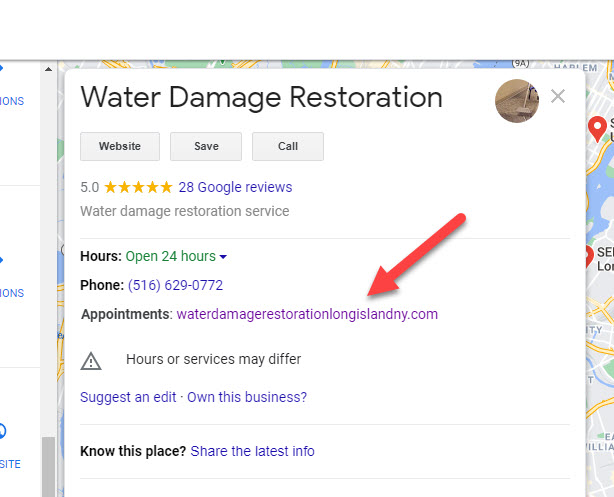 We also looked deeper into listings that had an address that did not represent a restoration business. Listings that looked like this in street view..... 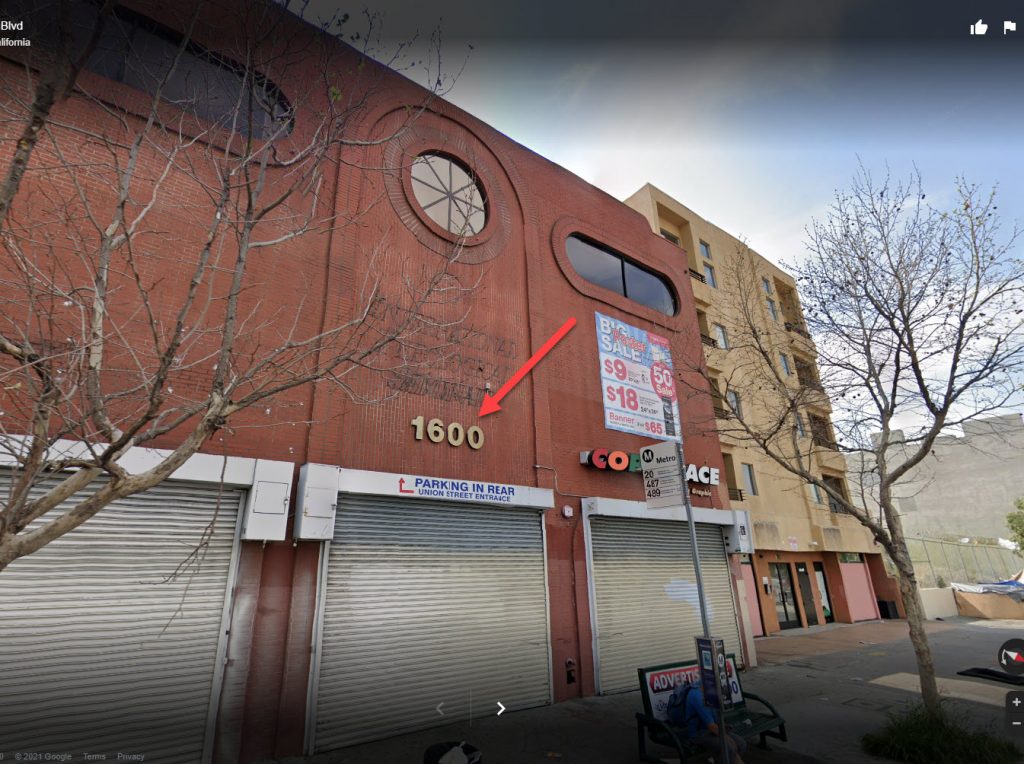 What This Study Was Not:

Even if real businesses were stuffing their name with keywords, we left them alone. Instead, we were after truly fake listings.

This study was not a witch hunt. The goal was not to punish real businesses that were gaming the system. 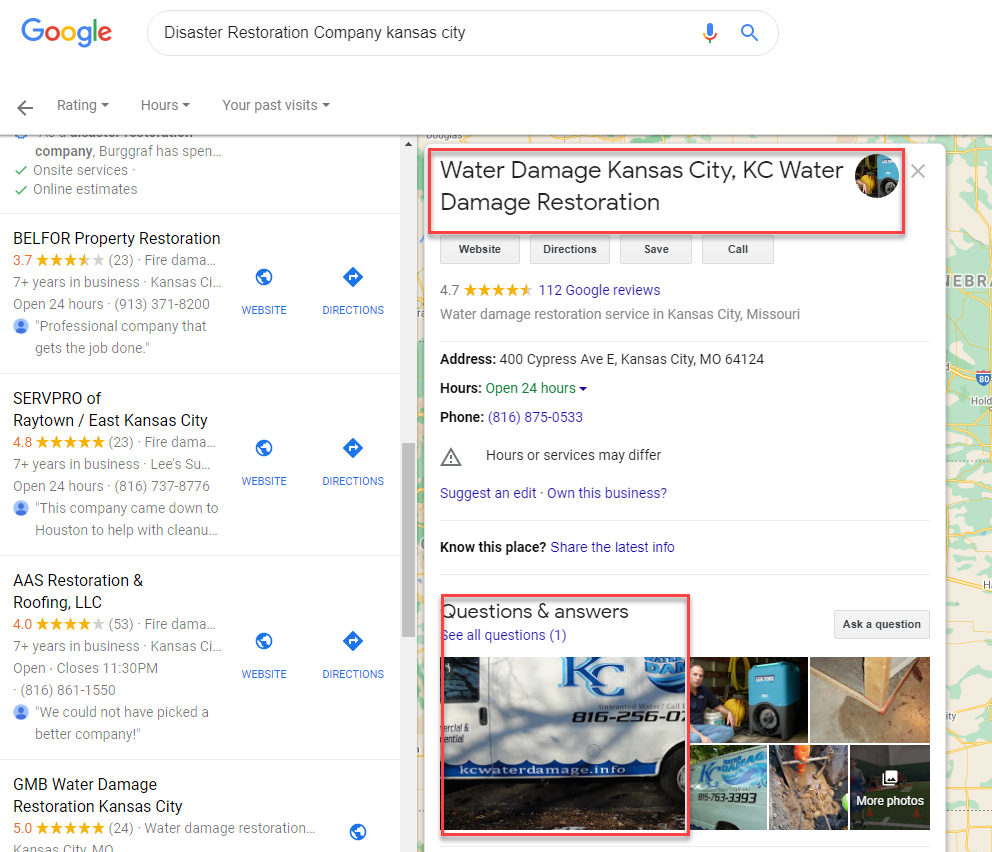 This person is running a legitimate business. You can see a branded vehicle in the pictures. The phone number on the van matches the one in the listing. The website looked legitimate as well.

We weren't out to find listings using incorrect names. We were out to find fake listings and understand their common characteristics.

Some fake Google My Business Listings were more egregious than others. However, it amazed us that so many counterfeit listings could exist without being caught by Google.

Some, it seems, dared Google to catch them.

What We Wanted To Understand:

We set out to understand the common attributes of  blatantly fake listings. In addition, we wanted to know how Google treats these listings when there appears to be an issue. In this study, we identified:

Our Process For The Fake GMB Local SEO Study

We took a deep dive into 34 markets across the United States. For each market, we would use the exact search term  “Market + Disaster Restoration Company.”

We then manually reviewed the first 10 pages of the Maps listings. Unfortunately, there were not 10 pages of results in many markets, so we went as far as was possible.

We made a note of anything that looked suspicious. Finally, after identifying 250 potentially fake listings, it was time to take action.

We began by testing the features within the business listing itself by following the below steps. 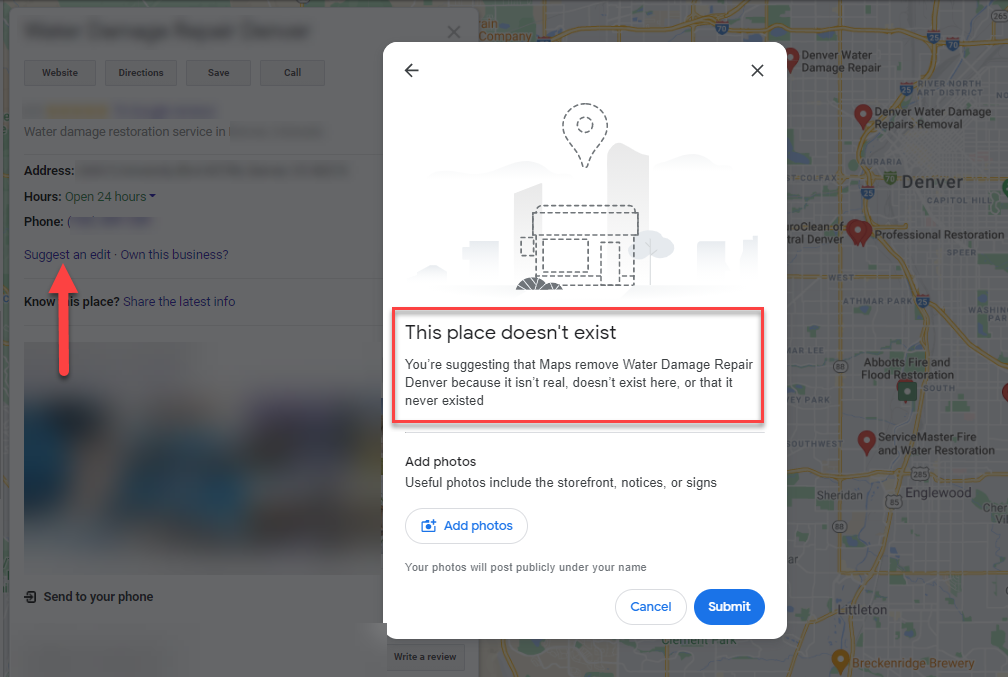 According to Google’s messaging, this feature exists if “You’re suggesting that Maps remove 'Company XYZ' because it isn’t real, doesn’t exist here, or that it never existed.”

To keep the process consistent, we used this same option for every business that we reported.

Some may insist that we should have used another method.  However, we wanted to test this feature specifically.

We used a Google account that had been in existence for several years, but that had never suggested an edit. We felt it was essential to understand whether or not you had to be a Local Expert to move the needle.

How We Avoided Ruining Real Businesses

As mentioned before, we wanted to avoid impacting real businesses in the industry. Therefore, a human individually reviewed each listing. We did nothing systematically or algorithmically. If there was anything to suggest the business was legitimate, we left it alone.

But we took it a step further. We performed a corporation and entity search in each respective state's database before taking any action.

For example, here is what New York's database search feature looks like.

If the business name wasn't found registered or filed with the state, we considered it fair game for the study.

How It All Went Down:

On February 18, 2021, we began reporting potentially fake businesses. By the end of the day, February 19, 2021, we had reported 250 different Google My Business Listings in the restoration industry.

Within 10 days, Google published 132 edits, which meant the end for 132 fake Google My Business listings.

52% of the listings we reported we gone within two weeks. Well done, Google!

What About The Remaining 118 Fake Google My Business Listings?

We were confident that these were spam; however, Google did not apply the edits because, according to them, “Google couldn’t verify your edit.”

It was time to take things up a notch. We decided to use Google’s Business Redressal Complaint Form.

On March 12, 2021, we submitted the remaining 118 listings via a single spreadsheet through Google’s Business Redressal Form. They sent us a lovely little message.

We had officially entered the black box. Google won’t send you any updates. You can’t ask any questions. You hope that they action your requests.

We waited 3 weeks, then went back to check every single Google Maps link. Here’s what we found.

A Summary Of The Entire Process

Here is a summary of our process from end to end.

What Our Fake Google My Business Listing Study Revealed

Thanks to our efforts, we had confirmed that 201 of the listings were fake - spam at its finest.

Based on a dataset of 201 confirmed fake listings, we were able to extract these incredible facts. 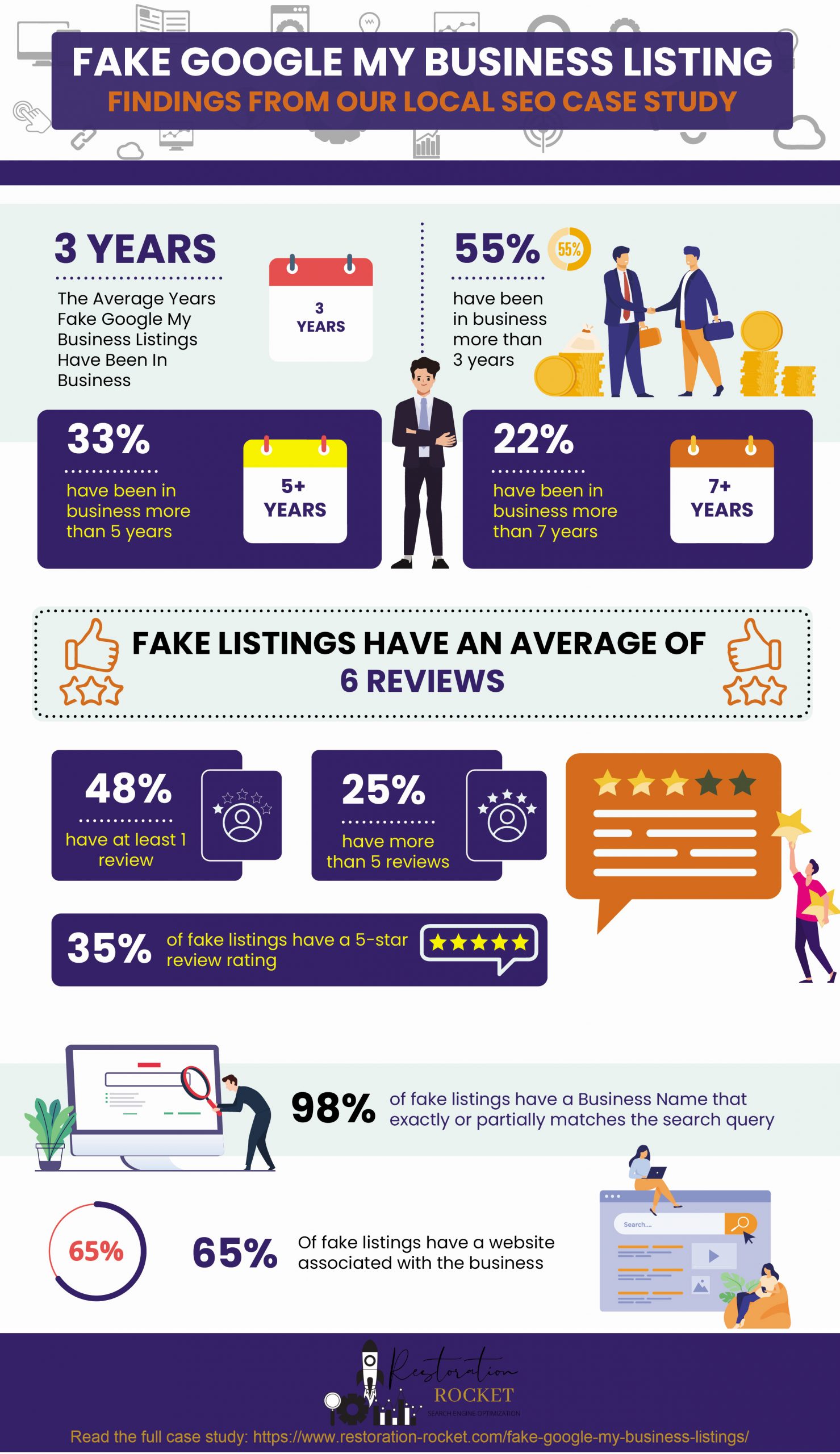 What We Found So Shocking

We were shocked by these 5 facts:

The restoration industry is relatively small when compared to others. Think about lawyers, dentists, physicians, car dealers, and other popular industries. What we and our clients experience is a microcosm of a broader issue. Extrapolated over thousands of cities and industries, it appears the Wall Street Journal is correct. There are millions of fake listings out there.

Google is not able to police these listings at scale. So it's up to individual business owners to take action, one market at a time. By being diligent and following practices like we outlined here, you too can protect your business from losing market share to these fake businesses.

If you're an SEO or marketer, go out there and defend your clients. Be their knight in shining armor. Get rid of the crap stealing their market share.

If you're a restoration business owner, you're in luck. We've already helped your local rankings. Pro Bono.

If you think working with us is right for you, then you have two options:

Work With Us FREE Through Our Case Study Scholarship Program

Click Here To Discover More About The Scholarship Program

Apply To Work With Us Full Time And Dominate Your Market

Click Here To Discover More About Working With Us